a tale of pirate treasure
Aye, let me tell you a tale, a tale of a ship, of a storm and of treasure. There be death and there be pirates in the tale so sit back and listen up.

Many years ago the Spanish (not the pirates in this tale, just the plunderers) filled a fleet of 28 ships full of treasure they had “found” in the New World. There was copper, silver, gold, tobacco, gems, jewelry and indigo, worth millions and all pretty and shiny. The ships gathered in Havana from all the ports of the Americas and prepared to sail back to Spain. Due to technical difficulties the convoy left Havana 6 weeks behind schedule on September 4, 1622.

Tragedy struck on September 6, as the fleet was driven by a severe hurricane onto the coral reefs near the Dry Tortugas, about 56 kilometers west of Key West, Florida. Two of the larger ships, the Nuestra Señora de Atocha and her sister ship – the Santa Margarita floundered desperately. With their hulls badly damaged, the vessels quickly sank, drowning everyone on aboard except for three sailors and two slaves.

When the surviving ships brought the news of the disaster back to Havana, Spanish authorities dispatched another five ships to salvage the Atocha and the Santa Margarita, which had run aground near where the Atocha sank. After several years of salvage operations, the Spaniards recovered nearly half of the vast treasure from the holds of the Margarita. They found no trace of the Atocha.

For 363 years the Atocha and her treasure lay lost beneath the sea luring many a treasure hunter with visions of untold wealth. American treasure hunter Mel Fisher and his team searched for 16 and a half years; Fisher had earlier recovered portions of the wrecked cargo of the Santa Margarita in 1980. On July 20, 1985 Fisher found the mother lode of silver, gold and emeralds, Fisher found the remains of the Nuestra Señora de Atocha.

Upon learning of the discovery, the United States government (ah, now we get to the pirates) claimed title to the wreck and the State of Florida seized many of the items Fisher had retrieved from his earliest salvage expeditions. After eight years of litigation, the U.S. Supreme Court ruled in favor of Fisher. 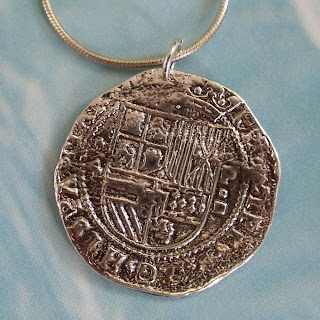 Now you can have your own treasure, a solid sterling silver piece of eight coin. Just watch out for the pirates. Available in my online store – here.

This entry was posted in jewelry. Bookmark the permalink.

2 Responses to “a tale of pirate treasure”