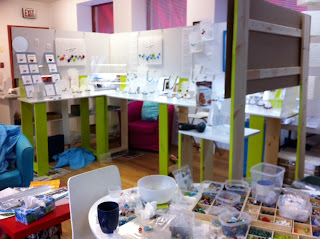 yes, it’s been mighty quiet here in the past couple of weeks. there was the mad rush of trying to see everything in Paris that we had missed until I realized that just wasn’t possible. It is SUCH a dense city, there is just too much. So I ended up sitting with a glass of wine and watching the world go by. There will be return trips.

upon my return I promptly came down with a horrible case of what I think was the bubonic plague. Ick. that was why things have been quiet, I was too sick to even post a photo, or look over the 1500 photos I have from Paris. Or worse, make beads or jewelry!!! ARGH!!!! I really really really wanted that time to make some fabulous new beads based on my trip but alas, it didn’t happen.

about the only thing i’ve been able to do in the past week and half was to build my small booth. The small booth is my Vancouver booth. This is the first time I’m exhibiting at the Circle Craft Market in Vancouver! Yippeeee!!!! Since it’s a new show, since it’s a new market, since it is way across the country, I’ve signed up for a smaller booth to test out everything. So I built a mock up of my booth and then tried to stuff all my work in it. Oops. This is proving to be … interesting. Having a fully set up booth in the middle of the studio is a bit crowded but it is nice to see everything out. Now I just have to stuff it all into a suitcase and take it on the plane. Fortunately the jewelry packs up nice and small. And heavy. I have it in a small wheely suitcase as carry on luggage. The only problem is that it weighs 80 pounds. Keep your fingers crossed that they don’t weigh the carry on luggage on Monday.