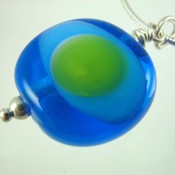 There was a bit of a technical glitch last month due to a computer crash. The question I asked was about a goal you have for 2012, however an older question also appeared asking about your favourite treat. So this month you answered both telling me more about treats and also about goals. Everyone who answered was entered into the giveaway and the winner is Julie Nasmith! Julie’s goal is to finish her pile of unfinished sewing projects by the end of 2012. As the owner of my own pile of unfinished sewing projects that is a goal I admire greatly. Personally I think elves begin most of these projects and leave them for us. Or maybe they just multiply on their own.

Julie’s wins my grass and sky bubble pendant. Yay! First giveaway of 2012!!!
This entry was posted in giveaway. Bookmark the permalink.