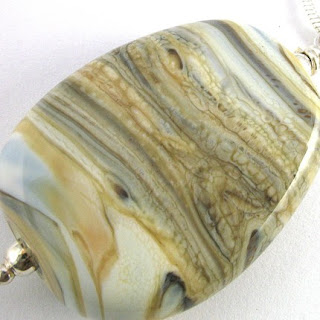 at first i thought of this as granite swirl. then it became sandstone. but now it’s furry. it is the colour of the sweet little feral kitty that’s living under my studio. it’s the same colour as last summers sweet little feral kitty. the mother is black and the father is a big-headed, mangy, snaggle-toothed tom coloured just like this bead. i’m not sure if this summers kitty is actually living under the studio as these cats don’t stick around if they see humans. however when i’m torching away staring out the window they can’t see me, (or at least they don’t recognize me as human when i’m wearing my didymium glasses and welding apron) and i watch the kitten frolick playing with such fun toys as half-dead mice. i’ve invited him in as i wouldn’t mind a little furry company but a glass studio really isn’t a good place for a cat. and he seems to prefer the half-dead mice to people. so i’ll just sneak out the occasional piece of beef and watch from a distance.

This entry was posted in glass. Bookmark the permalink.