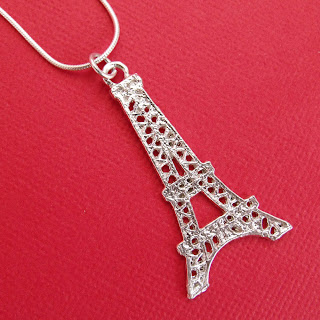 Bastille Day is the French national holiday which is celebrated on July 14. In France, it is formally called La Fete Nationale (National Celebration) and commonly le quatorze juillet (the 14th of July). It commemorates the 1790 Fete de la Federation, held on the first anniversary of the storming of the Bastille on 14 July 1789; the anniversary of the storming of the Bastille fortress-prison was seen as a symbol of the uprising of the modern nation, and of the reconciliation of all the French inside the constitutional monarchy which preceded the First Republic, during the French Revolution.

Go ahead, put on your Edith Piaf CD, pour yourself un verre du vin and break off a hunk of baguette to go with your Brie. Vive le France.
My eiffel tower necklace is available HERE.
This entry was posted in jewelry. Bookmark the permalink.