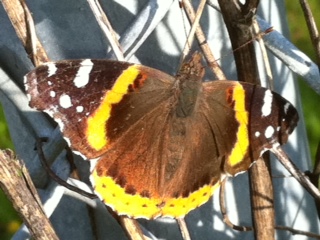 Have you seen them? They are EVERYWHERE! I first noticed these as we drove back to Toronto, home from vacation. We were driving along the lakefront from Erie to Buffalo. As we headed east we commented on the huge amount of bugs hitting the car. Hang on, we realized, they aren’t bugs, they are butterflies. And they are heading north. We pondered, we marveled, we felt bad that so many of them were ending their journey on the highway. We thought maybe it was the monarch migration.
I noticed them in Toronto, still heading north, they are everywhere. Yesterdays newspaper has shed some light, they are not monarchs, they are red admirals and apparently they are common. What’s unusual is the enormous amount of them this year. The non-winter in Texas where they spend the cold months have caused a spike in the numbers of red admirals. Not a bad thing at all.