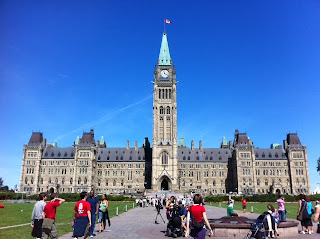 Oh what fun we had!

There was a spontaneous road trip last week to see the Caravaggio exhibit at the National Gallery in Ottawa. First there was a side trip to visit Robert and Bill of Henderson Farms jams. Love the jams! Love them! They make their jams on their family farm on Wolfe Island. We took the ferry over from Kingston and arrived at the farm just as Bill came back with the news that the elderberries were ripe. So while Robert whipped up the best flourless chocolate cake in the world we trotted off to pick elderberries. (Much easier once he showed me what an elderberry looks like, I’m such a city girl). The ferry ride back was under a full moon with a fireworks display in Kingston. Magical!
From there we drove to Ottawa. The exhibit was fantastic! When I was growing up in Ottawa the National Gallery was in a boring building that had no character. True story, my first job was as an elevator operator in that building. We won’t mention how long ago that was! The new gallery is truly spectacular. It’s a gorgeous light filled building that is so inviting to be in. One of my favourite parts was the Decoding Caravaggio room. Here they had a selection of costumes you could put on and be one of his paintings. My sister and I were, of course, the Martha and Mary. 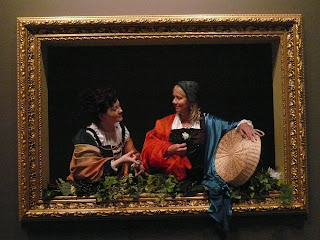 We had a lovely day renting bikes, my first time using the Bixi bikes system. Ottawa does have great bike paths and cycling is such a nice way to see the city. With blue skies and warm weather we saw it at it’s best.

On the way home we stopped in Tweed to visit Lucie and Dave of Lunacy Glass Studios. Lucie as a my glass mentor, I bow to her greatness. What that girl can do with glass is insane. They’re in the process of restoring a century old house, the current project involves scraping off wallpaper 22′ high. I admire people who do that.

It was a great break, a great roadtrip. There’s so much stuff to see and so much of it is right her in our backyards.

This entry was posted in inspiration. Bookmark the permalink.