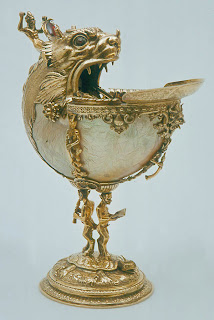 A few years ago I went to see the Treasures of the Hermitage at the Art Gallery of Ontario. My favourite part of the show was the curio room. When world exploration was at its peak, when Europeans were discovering the tropics, and the new world, and faraway places, explorers would bring back treasures. Some of these treasures were monetary (Aztec gold anyone?) and some treasures were just oddities. They were treasures because they were unheard of, never imagined, curiosities. And so they built curio rooms in the great houses. Alongside priceless paintings they displayed shells and nuts and pressed flowers. I love this idea! I’ve been collecting my own bits of treasure and I want to turn my dining room into a curio room due to a lack of a spare room for nothing but viewing. Recently I acquired a nautilus shell which I’ve always wanted. If anyone has a spare nautilus cup they don’t want, I could give it a good home!
I love the idea that the nautilus shell here is considered so valuable that they would decorate it with all this stunning goldwork. 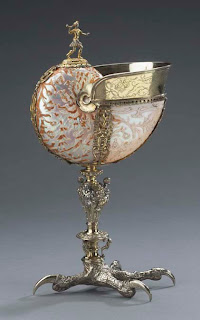 The Art Gallery of Ontario has a nice selection of nautilus cups if anyone is going. They also have cups made of coconut shells and ostrich eggs.

This entry was posted in nature. Bookmark the permalink.

One Response to “natures treasures”