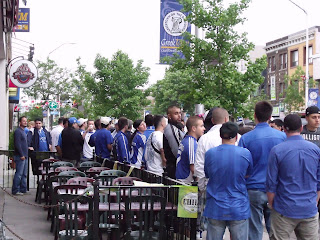 all the booth stuff was in the car, all i had to do was whip up to the studio first thing in the morning and grab the jewelry before heading over to the Beaches show. it was in bins, right by the front door. at 6:30 a.m. no problem to park, 5 minutes tops. except… have i mentioned that my studio is above a bar? a GREEK bar? in GREEKtown? and guess who’s playing their world cup game this morning??? it’s 6:30 a.m., there’s no parking, there are 100’s of people lined up to get into the bar which isn’t opening until 7 a.m. shots of ouzo are being passed around, cars are driving up and down honking, flags are being waved and all before i’ve had my morning cup of tea! my 5 minute load out was 35 minutes and accompanied by loads of “ole ole ole ole”. you gotta love this much enthusiasm.