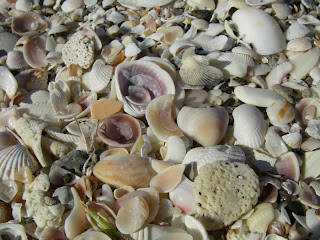 I’m on the prowl this trip, I’m looking for interesting, cool, unusual stuff to cast into silver trinkets. West coast Florida is a known shelling destination, the beaches are covered in fabulous shells and broken bits. There’s a large coral reef further south running along Mexico, Belize, Honduras. The shells get picked up by the Gulf Stream, a current that flows north, and they tumble along merrily until they get dropped on the west coast. It’s a treasure trove for those of us who can happily spend hours crouched at the surf line pawing through piles of bits.
Here’s the other thing these beaches are known for – sharks teeth. Sharks of all species continually shed their teeth and grow new ones. They have 40 or more teeth in each jaw. Behind the functional rows or teeth are seven other rows of teeth developing into mature dentures to replace teeth as they are shed or lost. In ten years, an average Tiger shark can produce as many as 24,000 teeth. I admit, when I learnt how to find these I was less then comfortable. After all, I’m floating around on a small plastic boat and there’s how many sharks out here? Then I learnt that these teeth are prehistoric. For millions of years, sharks have lived and died in the Gulf of Mexico. Dead sharks sink to the ocean floor where they are covered by layers of sand and silt. Over time, the cartilage of their bodies disintegrates. Water and storm action eventually sweeps the sand away, exposing the teeth. Some are washed up on shore with the changing tides and waves.
OK, so now I feel better, and now I want the perfect little sharks tooth to cast in silver. Back to the hunt. 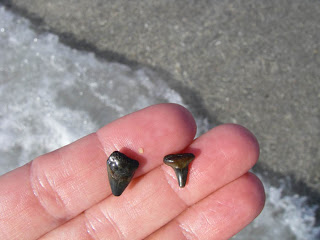