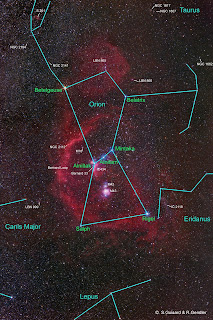 Orion, often referred to as “The Hunter,” is a prominent constellation – one of the largest, most conspicuous, and most recognizable in the night sky. According to myth, Orion was the son of the sea-god Poseidon and Euryale, daughter of Minos, King of Crete. Orion could walk on the waves because of his father; he walked to the island of Chios where he got drunk and attacked Merope, daughter of Oenopion, the ruler there. In vengeance, Oenopion blinded Orion and drove him away. Orion stumbled to Lemnos where Hephaestus — the lame smith-god — had his forge. Hephaestus told his servant, Cedalion, to guide Orion to the uttermost East where Helios, the Sun, healed him; Orion carried Cedalion around on his shoulders. Orion returned to Chios to punish Oenopion, but the king hid away underground and escaped Orion’s wrath. Orion’s next journey took him to Crete where he hunted with the goddess Artemis and her mother Leto, and in the course of the hunt, threatened to kill every beast on Earth. Mother Earth objected and sent a giant scorpion to kill Orion. The creature succeeded, and after his death, the goddesses asked Zeus to place Orion among the constellations. Zeus consented and, as a memorial to the hero’s death, added the Scorpion to the heavens as well.