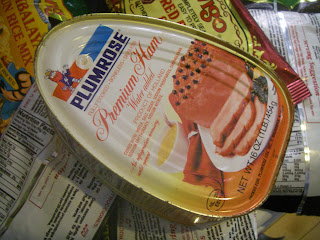 so what do you want for dinner in 3 months time? in normal circumstances i’d give you a wierd look if you asked me that and tell you to ask again in 3 months. however when getting ready to go afloat it’s a real question. we don’t quite know where we’re going so there needs to be food on board. it sounds really glamorous to say we’ll be hanging out on a deserted island in the middle of the bahamas for a few weeks however glamour has to be fed 3 times a day. and the thing with deserted islands is that there aren’t any supermarkets. all this is compounded by the fact that we don’t have refrigeration aboard. even if we did, a boat fridge is about the size of a glove compartment. hence the dreaded ham. every boat has a ham on board, it’s there so that everything else in the cupboards will look more appealing. no matter how much you think, there’s nothing to eat, when you look at the ham you realize how there’s all sorts of other options. anything except the ham. not that it’s inedible, it’s just … well… it’s a canned ham. it is the colour of a boiled barbie doll with the texture of a wet sock. as one friend said, “close your eyes, click your heels 3 times, and think ham think ham think ham.”
tomorrow i’m off grocery shopping to buy lunch for april 20th, and 21st and everyday between now and then. hmm…..