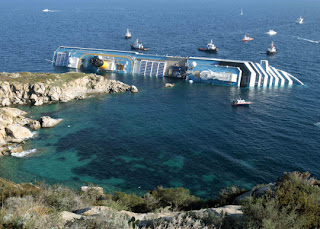 Dude, what were you thinking? Even I, in my little 27′ sailboat which only draws 4′ would not sail this close to a shore that is strewn with reefs. This is human error at its’ worst. Such a shame as now even more people will be terrified of going off on an adventure.

When I tell people that I sail off into the blue yonder there’s a moment of silence and I brace for it. “Aren’t you afraid of pirates?” “Have you ever been in any terrible storms?”
They always want to know the bad parts. Is it the fear of the unknown that stops poeple from taking a step out of the box?

Pirates are few and far between. Most of the pirates are in Somalia which is on the other side of the planet. Why would I be afraid of something so far away? The acts of “piracy” that happen here are nothing more than petty theft. It’s the boating equivalent of having your car broken into. Only it happens less than it does with cars.

There’s 2 ways to approach the unknown. One is a disaster waiting to happen. The other is an adventure to be had.

Me, I’m all for the adventure. What about you?